Vocoders can now be heard pretty often in popular music. Dating back at least 40 years, they have been used by influential electronic artists such as Kraftwerk, legendary songwriter and drummer Phil Collins, and more recently by forward-thinking pop performer Imogen Heap. Although the vocoder effect eventually found its way into our music production toolbox, it was originally intended for a much different purpose.

Homer Dudley of Bell Labs invented the vocoder as a method of reducing the bandwidth of a vocal signal, as a way to reduce cost for expensive transatlantic copper cables. I find it interesting that the vocoder shares its original intention with the once controversial but now widely used .mp3 format. Both are essentially forms of data compression. This proved to be not as cost-effective as hoped, but the vocoder was repurposed as a method of securing conversations between political powers during World War 2.

A vocoder operates by taking a control or modulator signal (such as the human voice sung or spoken into a microphone) and splits the signal into numerous bands. We then use the amplitude of these signals to drive an instrument, also known as a carrier. Because the signal is split several times, the resulting effect keeps in tact sounds that are recognizable in human speech, and combines these sounds with the instrument used as the carrier (often times a synthesizer.) The resulting effect when using a synthesizer is a multitimbral musical instrument that still retains the qualities of human speech. A thorough breakdown of this process can be viewed here.

My personal favorite uses of the vocoder are by Kraftwerk, who used the instrument as a method of musically reinforcing the lyrics to their songs, which were often times about the relationship between humans and technology, but there have been many less conceptual uses for the vocoder that still resulted in unique and enjoyable music. If you are interested in achieving the vocoder sound, there are many options inside and outside the box. Korg is a very popular and affordable option if interested in purchasing a hardware synth. For use in a DAW, I recently discovered the iZotope Vocal Synth, which I have found to be extremely versatile and capable of achieving wonderful musical results in virtually no time at all.

In the video below I do a quick demonstration of setting up and creating a vocoder with iZotope’s VocalSynth. 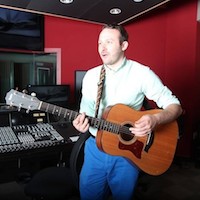 Ian Vargo is a Producer, Mixer and Audio Professor based in Los Angeles. He has worked on numerous major label and independent records. Get in touch on his website or learn more from him in his new Mastering in the Box course.
TheProAudioFiles